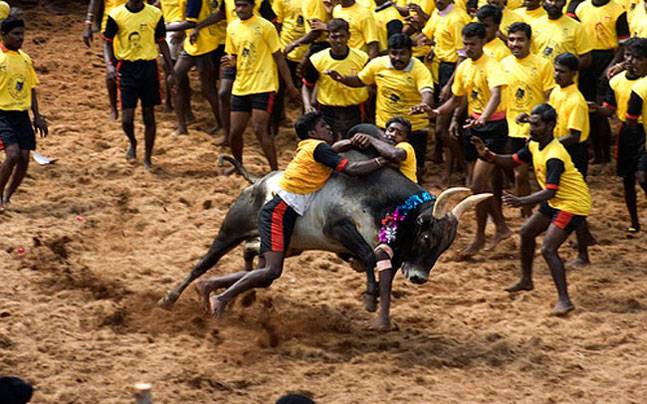 Jallikattu, the talk of the hour in Tamil Nadu, is showcasing a rather tritely unique phenomenon in India. Scads of commoners from various cities, with love for their ‘culture and tradition’, are feverously opposing the Supreme Court verdict banning Jallikattu, a Pongal celebration sport in Tamil Nadu where a bull is released amidst a crowd and the participants try holding on to the hump of the bull, often trying to grab various flags and silver coins tied on the bull’s horns. The basis of this controversial verdict passed by the SC was “cruelty towards the bull”.

Yet, Jallikattu continued with no regard to the conditions. So, the Animal Welfare Board of India (AWBI) put up a notification barring bulls from being exhibited or trained as performing animals. In the case of Animal Welfare Board of India & Ors. v. A. Nagaraja & Ors.[2], the petitioners approached the SC with an appeal against order of the Division Bench, aiming to enforce its notification, the respondents on the other hand claimed that Jallikattu being a traditional sport of Tamil Nadu ought not to be banned.

The SC decisively passed an interim order recognizing the validity of this AWBI notification and the rights guaranteed to bulls under the Prevention of Cruelty of Animal (PCA) Act. In light of the cruelty being inflicted upon the bulls despite the anti-cruelty measures, the SC officially and judicially put a bar on Jallikattu reiterating the ‘five freedoms’ of animals which include:

The complete order of the Supreme Court’s 2014 ban upon Jallikattu can be found here.

However, despite the notification by AWBI and the SC order of 2014, on January 8, 2016 the Environment Minister,  Prakash Javadekar, issued a notification, exploiting the inevitable loopholes in legal policies and rules, whereby Jallikattu bulls were exempted from the said list without blatantly removing  word ‘bulls’. Animal welfare activists and organizations approached the SC for a stay to this notification which was patently demeaning the judiciary of our land.

On January 12, 2016 a writ was filed before the SC for the quashing of this notification and for compliance with the above mentioned SC order. In this case, Compassion Unlimited Plus Action & Ors. v. Union of India & Ors.[3], the SC stayed this notification on the grounds of cruelty towards the bull and welfare of the animal being of paramount importance in comparison to the claimed ‘culture and tradition’ The January 12, 2016 SC verdict can be found here.

But again, an unconcerted effort was made to evade the judicial order; the Tamil Nadu state government, exercising its power under the Constitution[4], came up with an ordinance circumventing the ban and legalizing Jallikattu by changing the name and nature of Jallikattu from a ‘sport’ to a ‘fair’. The ordinance can be found here.

The Executive however, is not the only body taking steps against the SC ban; the general public of Tamil Nadu is taking all steps in its power to resist and upturn the SC verdict. The steps taken by the Centre and the State relay an impression that all these are in fact a never-ending tuff between the Executive and the Judiciary, and however apolitical this might seem, politics never really leaves the fora!

When I think about the rationale behind the ban, I fail miserably to fathom the true reason and meaning behind all these protests. Let us have a very rational look at the thought process of the supporters of Jallikattu and may be the SC verdict would seem to be more logical and all the hue and cry may start seeming a bit overboard!

Love and affection towards the bulls?!

Bull owners insist that they give immense love, care and affection to the bulls and rear them as a member of their families. Even if this is true why showcase their “love and care” in such dreadful arenas? To show our love towards a family member, we don’t push them into an arena and let them be prodded, goaded and mounted ruthlessly upon, do we? This sentiment of “love and affection” poses a very convoluted and uncanny picture of human emotions and virtues. Bulls are prey animals, herbivores, it is their natural and scientific instinct to escape from any threatening circumstances, including huge crowd of excited and agitated people, which is a rather irksome situation in itself, let alone for a distressed and exhausted bull!

Another worry of the people is that Jallikattu bulls are the best and purest breed of bulls and the milk from their mates give us the A2 milk, considered the finest and healthiest. Some believe that bulls, specifically Jallikattu bulls, being high-maintenance and domestic in nature would vanish to the point of extinction if the sport is banned, as the one single motivation and pride of the farmers or the bull owners would be snatched away from them, depriving them of the incentive for domesticating the bull.

These beliefs and fears however cannot be considered to be substantive enough mainly in the view of two issues:

Pragmatically viewed, Jallikattu would in no way be a savior to the farmers and it is not the end solution for enhancement of milk quality.

One could say- that absolute banning of Jallikattu is not the solution and what is needed is a stringent regulatory mechanism to ensure that cruelty is not inflicted upon the bulls. While a realist would argue that with time every tradition but whatever be the argument, what is important here is to realize that tradition and culture should trump neither reason nor the judiciary.

As reported on January 20, 2017, the massive protests in Tamil Nadu and the push by the Center and State led to the SC’s decision to put on hold its interim verdict for a week so that Jallikattu may be carried on this season in accordance with the state ordinance. On January 31, 2017 the Supreme Court finally conceded and refused to stay the amendments to PCA Act brought forth by the State Government, which legalized Jallikattu to be played across Tamil Nadu. The forced relief granted by the SC, regardless of its constant conviction towards the cruelty inflicted upon the bulls, reflects a profusely negative thrust to the most significant and least tainted body of our land, the Supreme Court of India! This may be a real win for India’s Democracy but this also is a grim reflection of the weak executive forces in times of such enormous public outcry.